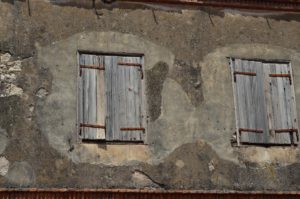 This is a sequel to What‘s your Threshold of Pain post.

How many of you like taxes? I would guess most of you do not, but see it as a necessary evil. Did you know that in 1696 England imposed a window tax on its citizens? It did not go over well! Some people decided to brick up some of their windows to either lower their taxes or eliminate them all together. They always assumed they would go back and reglaze them at a later date. Well, they had a long wait because that tax lasted until 1845! The tax system that was put into effect was essentially two parts: a flat tax rate on your house of 2 shillings and then an additional tax for the number of windows exceeding 10. Properties with 10 to 20 windows were subject to a 4 shilling tax and for those fancy properties with over 20 windows, an 8 shilling tax was imposed. It is hard to calculate what that converts to in today’s dollar but I imagine the shilling is valued at less than ten dollars. Despite the fact it was nowhere near what you pay for your residential taxes today; people were angered and considered it a tax on light and air. France had a similar tax that lasted until 1926! Those French are always looking to outdo everyone. There were some exceptions to the tax. All cheese rooms, dairies and milk houses were exempt. I would have labeled my dining room a cheese room and my kitchen a milk house, which should have done the trick! Relabeling and repurposing room names are a topic for a future blog.

Before the tax, windows were a rare sight. Many years prior windows were just openings in an exterior wall and had shutters or animal hides to cover them when it was needed. As time went on translucent animal horns, thinly sliced marble and in the Far East paper was used as a window material. Eventually, Romans developed the glass window pane around the time of the first century. This was when windows, as we are more familiar with today started to evolve.

I hope this gives you a clear understanding as to the title of this blog!