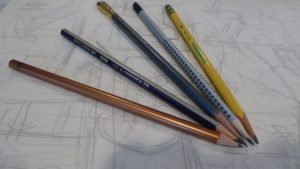 What I use most in my practice is the pencil. It is great for creating quick layouts and easily erasable. As I work through my plans and elevations the pencil gives the most flexibility and freedom to change and manipulate my schemes. I prefer the 2B pencil which gives me the ability to lay down a dark line or a light line and shade easily. What is the history of this great tool?

First, let’s start out with why is it called a lead pencil? Is there lead in there? Should I be worried about any little ones putting it in their mouths? Rest at ease no lead is used in your pencil it is actually a mixture of finely ground graphite and clay, so why “lead” pencil? The original writing instrument goes way back to ancient Rome when scribes would use a stylus formed from lead to writing on papyrus. The soft metal would rub off on the writing surface.

In the 1560’s shepherds discovered a black substance on the roots of an uprooted tree following a storm. They found this substance ideal for marking their sheep. This substance turned out to be graphite, which is a crystallized form of carbon and was referred to lead because of its similar appearance. It became a very popular writing substance due to its versatility of ease of erasing as well as the ability to draw over it with ink. I do this as well, if I sketch something out I will then go over it with a marker to create a crisp bold image.

1662 was the year pencils finally started mass production as a graphite stick encased in wood. Prior to this string was the preferred encasement. Pencil companies that followed soon after are still in existence today such as Faber-Castell and Steadtler.

The word pencil derives from the Latin word penicillus which means small tail or a fine brush and old French pincel. Some fun facts that I have gathered from the web are; an average pencil can draw a line 35 miles long and before the eraser was developed people used bread crumbs to erase. That drawing was toast if it ever saw bread! 15 t 20 billion pencils are made each year and half of them come from China. The longest pencil in the world happens to be a colored pencil and is 1,509 ft 1.05 inch long. Check out the video here; https://www.youtube.com/watch?time_continue=1&v=cIj6LjQIDC0

The following link is to the largest pencil weighing in at 18,000 pounds making it very difficult to draw with!

I prefer the weight of my pencil to be under a third of an ounce. So the next time you pick up your pencil realize that if it were not for some sheep herders you may have been picking up something else!