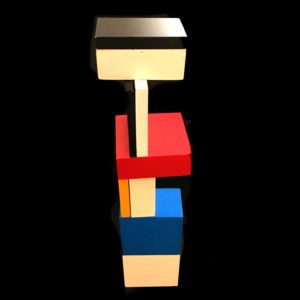 Friedrich Froebel invented the word kindergarten (garden for the children) and he also created “Froebel Gifts”. We all know about kindergarten since we have all gone there, but who knows about the Froebel Gifts? I would say most architects know! Frank Lloyd Wright received this influential toy from his mother who purchased the toy at the 1876 World’s Fair in Philadelphia. It influenced his entire future. So what is it? They are a series of the first educational toys that were created to educate kindergartners. The influential “gift” on Frank would have been the building blocks, but other toys consisted of yarn and colorful elements. Frank was not the only one influenced by Froebel; Buckminster Fuller, the founder of the geodesic dome, also spent his fair share of playtime with the blocks. And guess what? It was not limited to architects, artists Paul Klee and Wassily Kandinsky managed to find pleasure in making their own creations. Albert Einstein got his kicks from an offshoot of the Froebel blocks that were created out of faux stone.

Frank Lloyd Wright’s son, John Lloyd, felt that by 1916 it was time for something new. After being influenced by one of his pop’s designs, The Imperial Hotel, he created Lincoln Logs. How many of you people had Lincoln Logs? I did, and loved them! This was before I had any idea what an architect was.

When you were in kindergarten do you remember those giant building blocks that were arches and rectangles and ramps? Well, those were influenced by Froebel as well. They are Pratt Unit Blocks, created by whom else… Caroline Pratt! Another influential teacher was Patty Hill who created… you guessed it the Patty Hill Blocks! Much larger blocks, making it a two child job to manipulate them. Not only did Patty create these block, she is the founder of the modern-day kindergarten. But her biggest achievement was co-composing with her sister the tune to “Happy Birthday to You”!

Many variations on these toys have followed throughout the years introducing colors and shapes. Some of the unique ones are Meccano (mechanical model building set) 1901, Tinker Toys (inspired by watching kids play with pencils and spools) 1914, and the Erector Set (metal construction) 1913. The most recent entry is the Lego 1949. The Lego has even inspired a New Jersey Architect to create an entire program of influencing young as well as old people to create structures on a grand scale. In addition, a new Legoland Discovery Center opened in the Philadelphia area just this past month! Planning my trip!

I have to admit I still love playing with blocks if the opportunity arises. I have my own arsenal of wood blocks and toys. My favorites are my Swiss made Naef toys purchased in Switzerland back in 1982. I keep them hidden so my girls don’t play with them! I hope my wife is not reading this.