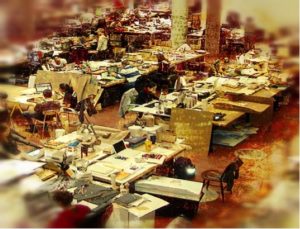 Ever wonder what it would have been like to have gone to architecture school? It seems like 75% of the time someone asks me what I do, their response is, really? I always thought about being an architect. What did you miss out on? What would that first day of architecture school have been like if you chose that career path? I am sure every school is completely different and each individual experience is unique, so I can only tell you about my personal experience. I attended Virginia Tech which has a rich tradition of problem solving through experimental as well as trial and error methods. You are required to do a lot of internal reflection and independent analysis in seeking your personal architectural expression by creating and inventing your own architectural problem/solution. From the very first day you begin your journey which will continue for five years of school, (five years is how long it takes to acquire a Bachelor of Architecture degree), and then carry on throughout the rest of your professional career. So what is that initial project that gets your senses prepared for this lifelong journey and does it work? The following is my personal experience as well as some memories of my peers who were kind enough to share along with some architecture schools’ professors.

On my first day all the first year architecture students are sitting at long rows of tables on stools waiting for the professor to walk in. No one has any idea what to expect. The professor finally walks in late, (I think it was intentional to build up the suspense) and hands everyone a single sheet of a heavy stock paper approximately 18 inches by 24 inches and some balsa wood sticks. We were instructed to create beautiful curves only using those two items. We all looked at each other wondering what is going on. But who were we to question such a request, so we all started manipulating the paper about the stick to create our beautiful curves. 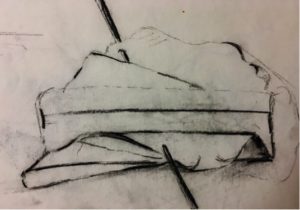 What makes a curve beautiful? In my opinion, all curves are beautiful. Once we completed the task we had to take out our sketch books and draw the beautiful curves and then the negative space the curves formed. This was the warm up exercise to get us ready for the next critical step. We were instructed to go outside and find ourselves a nice twig (not too big) lying about on campus. Once we had the twig we had to rotate it and draw the space formed as we rotated the twig, not the twig the actual volume of space formed. The next step was to make it three dimensional with limiting your model to two sources and no glue. Quite a few people took a beating from the professor on the dimensionality of their model. Until this day I am unclear on the aspect of their criticism. Maybe they just wanted to belittle people. 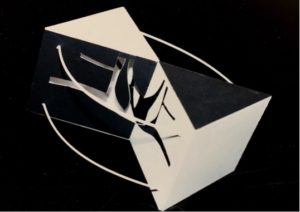 That first day had an incredible influence on me because it unlocked my perception of common items and my understanding of them in different ways. The exercise gave me another dimension of appreciation for an object and how it impacts its surroundings. How did the light affect the space via highlights and shadows? What spaces did solids create? Negatives and positives coming together. Spatial relationships and how can I make a connection without any bonding agent. I think about that simple twig until this day. So for me, my introduction to architecture via the design studio was quite impactful. 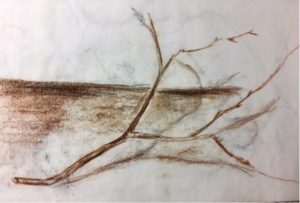 For my friends who went to other schools the following is what they could remember;

I drew my hand.

I did a technical drawing of an exacto knife.

I created a guest house for an existing modernist house.

Our professor had us design a “regeneration unit” another term for a bathroom an exercise in rethinking a common place.

The prompt was when is a box not a box… we had three days to respond.

Had to drop my keys on my desk and explore the patterns.

We took a piece of famous art and made a square, rectilinear representation of it.  Then, from that, we developed a 3-d representation, in the form of a cube.

We had to read Louis Kahn’s “Between Silence and Light” then go out and photographically capture concepts within the book such as Order, Joy, Touch, Site, Wonder et al. (Grad School)

We were required to do sketches of everyday objects (10 a day) for about a week. Then chose one sketch, abstract it, and create a 3D model of the abstraction. I made a “beautiful” abstract 20oz coke bottle out of cardboard.

We had to walk for an hour through town sketching as we walked never letting the pencil leave the paper.

We were given a sheet of paper and instructed to create depth by scoring, cutting or folding.

We were asked to create a model of an object whose “differential was the resultant of a tetrahedron.”

We were called over to a large work table; the professor placed a sweet onion on it. With a grin the professor said something to the effect of, “I’ll be back in 20 minutes and we will discuss the onion and how it can teach you about architecture.”

A bag full of unshelled peanuts was emptied from a sack and then asked “what are these?”

We had to take 10 strips of paper approximately 1” x 18” each and a box of paper clips and construct a tower. No other items could be used.

We had to create a single unit into many and that many would become a new unit.

We created a sloped and a flat platform out of chipboard and then with just toothpicks and glue we had to create structures to support bricks.

Take a simple object and make it complex… I turned in a crumpled up piece of paper.

We were handed a hunk of heavy gage copper wire and instructed to make something beautiful.

We give a very complex multiple day project involving the manipulating of two 4”x4” cubes and their intersections to create one object. The assignment involves a two dimension (cruciform) pattern which is to be folded creating a transformation from the abstract to the concrete. Three terms considered are: superposition, twinning and interpenetration.

Students get into small groups of 5-6, and on a large piece of paper (6’ square) draw a series of concentric, freehand circles. One student begins by drawing a circle in graphite, about the size of a fist. The next student attempts to correct the imperfections in that circle by drawing one around it, also in graphite (1” bar of soft graphite). They continue on this way for a few days until the circle is about 4-5 ft. in diameter. We discuss the idea of circle, of what makes a circle, and the tension between the relative and absolute, between the idea of a thing and the forces acting on something coming into the physical world. The project is simple in that everyone knows a circle, but most haven’t spent much time thinking about them. In just a few days, large questions about the role of media, tools, drawing, ideas, geometry, history, and context have been introduced, and these are returned to throughout the year.

We were given a Pink Pearl Eraser and sheet of sand paper. I proudly carved mine into what resembled a F-1 race car. He picked it up, laughed, and said I should consider industrial design instead of architecture. Then he announced to the studio not to do what I had done, gave me a new one, told me to start over and try harder not to make it not to replicate other objects. He also instructed me to switch from my dominant right hand to my left…

Assignment: do five translations of your hand.

We were all given an add/drop form. You know, the forms to add and drop classes from your schedule for the semester. We were asked to build a model from this form, or was it in response to this form, without using any glue or tape. If we were unable to do this, then we could fill out the form and leave.

We were either given, or told to go out and get, a bar of soap and a nail. We were told to make something for our hand.

First project was to show the difference between positive and negative, but you could not ask any questions of anyone.

We were left alone with a white onion for three hours and told to write about it.

So if you thought you were going to walk in on your first day and start designing buildings you would have been sadly mistaken, but the journey they take you on to get there is magical!