Is your Home Weeping? 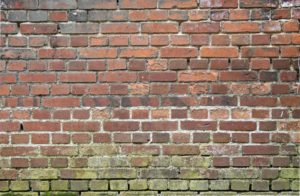 Do you own a home with a brick veneer? Did you ever notice along the bottom edge of the brick near grade you have holes? Why would the mason leave all those holes in my wall? Because brick is actually porous and since it is exposed to the elements moisture gets in behind the brick. It gets behind the brick you want it to get out! My home on the other hand which was built in the early nineties didn’t seem to get the memo! My home is not alone all the development homes I’ve seen built over 25 years ago seem to be missing this feature. So why is that? I did a little snooping and discovered New Jersey’s adopted building code back at that time was the CABO One and Two Family Dwelling Code. If you go back to the 1992 Edition there is one reference to weeps and it is not in the body of any code citing. It is actually depicted in one diagram; Figure R503.4 which is in Section R-503 Exterior Covering. Section R-503.4 Masonry veneer- general references this diagram as to how all masonry veneer structures should be constructed. The above-mentioned figure notes that weeps shall be provided at 4’-0” o.c. It does not describe what an acceptable weep is, how to construct it, where it should be located or having any type of flashing requirement behind it. Hmmm, maybe the code officials at the time just figured it was nothing to be concerned with.

Several years later New Jersey updated its enforcement to CABO 1995 Edition and guess what… the diagram on weeps got a little more detailed and actually referred back to a citing (703.7.3 Flashing & 703.7.4 Weepholes) describing it a with a little more detail. It included the information about flashing, it described the minimum size and it lessened the spacing to 33 inches on center versus the previous 48 inches on center. Many years have passed since the adoption of the CABO 1995 and New Jersey has updated four times since then. We are now using the International Residential Code 2015 NJ Edition and in all those years (over 20) that section has not changed a bit! I guess that a pretty solid endorsement of weeps being 33 inches on center! However, the Brick Institute of America thinks 24” on center is better and maybe 16” on center is even ideal. The bottom line is you want to make sure you get the moisture out of the wall to the exterior before it gets on the inside of your home. If this happens your wall will be the only one weeping!