Structural Review of Your Home 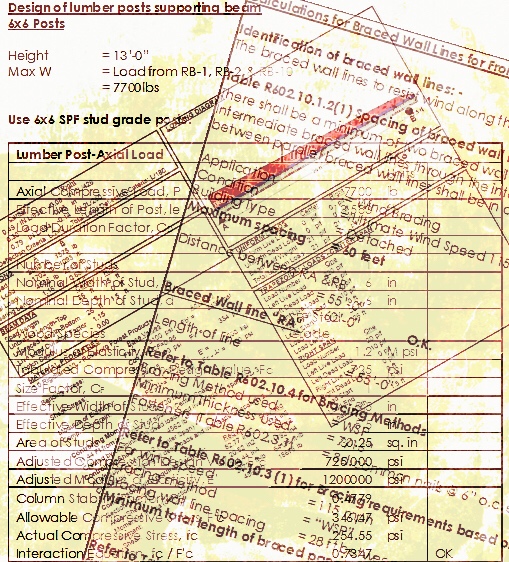 What’s required while designing a new home or perhaps adding an addition or altering an existing house? Your architect is going to look at the organization of rooms how they flow from one space to the next and examines how this impacts the exterior. But designing the floor plans and exterior elevations is just part of the process. In addition to the design, your architect needs to consider how it’s all going to stand up.

Have you ever considered all the structural components of your home or any building for that matter? Your home is designed to support loads starting from the top of your roof and transferring them down to the ground below your basement. This is accomplished through the design of roof systems, beams, load-bearing walls, floor systems, columns, foundation walls and footings. But this is just considering the gravity loads broken down into dead and live loads. Live loads are considered temporary loads such as furniture and people whereas dead loads are static loads ones that do not change such as floor & wall finishes, building materials and mechanical equipment which create a continuous strain on the structure. Other items considered are snow loads, wind loads and seismic (earthquake-induced) forces. Analyses of such forces examine compression, tension, shear, uplift, deflection, torsion and bending of different structural elements supporting these loads.

Elements that can be found in an individual structure could be any of the following; walls, beams, columns, arches, trusses, cables, slabs, shells and more. In addition, the materials selected have their own unique properties which need to be considered when creating this analysis such as; wood, masonry, steel, aluminum, concrete and composite materials.

As an example a floor system in your home could be made up of conventional lumber such as 2×10’s or it could be a pre-engineered wood I-joist or open web floor trusses. There are advantages and disadvantages to materials such as a wood I-joist or a truss is going to span greater distances than conventional lumber given the depth of the member however an I-joist is going to burn much quicker than a 2×10. But the point is that these products have different values in terms of strength and when calculating spans and loads being imposed on these components they must be analyzed as such. The structural design of your home is an intense analysis and must be done in accordance with the requirements set forth by the building codes.

You may want to request the calculations from your architect to make sure they are actually running calculations on beams and columns as well as all the other components in your home to ensure you are safe. The local construction official is permitted to request these documents as well but I have never been asked to provide them.

On occasion, I will get a phone call from a general contractor who has been building for years and complains about the size of a beam and he’ll say something like “I think three 2×10’s is more than sufficient for that header”. I’ll respond “did you do any calculations to come up with that solution?” and of course they have not, just their gut feeling or some general rule of thumb. I welcome them to hire a structural engineer to resolve the issue if they feel that strongly about it, but they never do. You do not want someone designing your home that is using their gut feelings or instincts to determine what is going to hold your house up!

Next time you work with an architect don’t be afraid to ask to see the structural calculations, even if you don’t know what you are looking at it’s reassuring to know they went through the process of calculating beams rather than just putting in a double 2×10 header over your window because it seems sufficient.