The Hottest Place to Be

Just got back from Iceland and despite its name, it is truly a great source of heat. This little island which is approximately the size of Pennsylvania is formed at the intersection of two tectonic plates, the Eurasian and North American plates. This makes it a geological hot bed for volcanic action and geothermal energy. Because of its limited size and a population of approximately 334,000 people which is about 150,000 fewer people than living in Morris County, NJ they are able to provide 90% of its residents with heat via geothermal energy! Despite the fact that the United States produces the most energy via geothermal energy in the world, it cannot benefit the areas where most of the population lives. This geothermal activity takes place in the west and all the people live in the east.

Not only does Iceland benefit from its supply of geothermal energy it also taps into its tremendous source of water with hydropower. 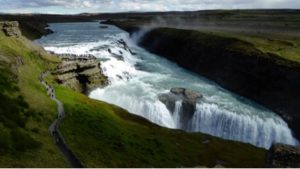 This country has an endless supply of waterfalls. As you drive around the country it seems like everyone has one in their backyard! In addition to the geothermal and hydropower, they are now tapping into wind as a resource for energy. So if you want to experience a country using 100% renewable energy venture on over to Iceland and see what’s cooking. The funny thing is that heat is probably the best deal in Iceland. Power is about 40% cheaper in Iceland but watch out because everything else is through the roof! A doughnut and a cup of coffee can cost over $7.00!